PENFOLD: AKA DJ DreamHead
pic taken by my wife, Dena during )^( 1998 @ Frequency Publica Radio
One of many dreams of mine was to be a Disk Jockey and spin nothing but the music of my favourite group, Tangerine Dream and bring the music to the masses of a Recording Artist that's been around for over 30 Years.
It's also unfortunate that many commercial radio stations don't give this group any airplay, partly because of TD's refusal to bow to popular pressure and record "radio fodder" pieces of 3-5 minutes.
Alas, the opportunities afforded to the Average Joe to DJ or to do something like this are rather slim.
One way to bring music to the masses would have me flaunting the FCC and set up a Unlicensed Station.

Then I learned of the Burning Man Festival.

All of the radio stations in Black Rock City are as pirate as they come. Pains are taken so as to not broadcast on occupied frequencies and the on-playa stations are assigned frequencies with enough separation to avoid interfering with each other.
Through the )^( mailing list, I met a gentleman by the name of Peter Krantz, AKA DJ Moebius who had a radio station with an open sign-up sheet to allow average people to broadcast stuph.
I signed up for a couple of shifts. And fulfilled a years-long fantasy!
That was the 1997 Burn.
The DJ sat out in the open air exposed to the elements behind a folding table with all the transmitting equipment bolted into a lockable steel tool locker. My DJ shifts were in the late evening.....Brrrr!!!!!
I show up a little early to my first shift to get a quick procedural run-down of the mixing board and equipment. Once familiar, I cue up _Kiew Mission_ from TD's 1981 album "Exit" which happened to be the first TD album I ever listened to and my favourite.
At the conclusion of the track, I greet Black Rock City, identify myself for the first time and provide the translation of the spoken Russian in the piece.
How many people are listening? I don't care. I'm having the time of my life!
I start up the title track of TD's great 'Lost Album' _Green Desert_, originally recorded in 1973 but finally released in 1986. A random participant wandering by, makes an inquiry as to the artist playing and is impressed at hearing it's TD. Asking when it was recorded and hearing it was 1973, he was astounded!

I pulled another shift from midnight to 3am. DJ Moebius showed me how to perform a shutdown and lockup of the station and told me that I was more than welcome to DJ past 3am.
Moebius went to sleep and was extremely pleased to see me still spinning when he woke up at 7:30am!
I recounted an event that occured at dawn. As the sun rose above the horizon, I hear from numerous points around the city of people applauding the sunrise.....then some wag who just had to yell "Encore!".....As if! I still had to laugh and smile.

I've signed up for two shifts at Bear Lair Radio this year. 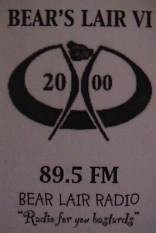 Bear Lair Radio's camp sticker
The DJ booth is inside a small fabric covered geodesic dome and the equipment set up is a mish-mosh of components. Despite the ad-hoc appearance, everything works and functions.
I do a "Desert and Fire" themed set for my first shift. I unfortunately have to blow off the second shift as the wife ended up in the med tent that afternoon with a bout of dehydration which sapped a lot of our energy.
Luckily, my wife (bless her heart!) surprises me by arranging a shift at our village's very own station, Radio Loose Whirrrlygig the next evening where I'll be taking over another DJ's shift as he wants to take a break.
I spin a freeform set, and while I'm spinning I'm treated to a few great experiences: 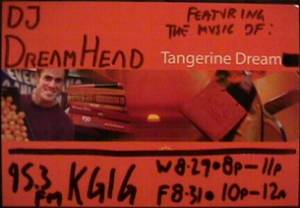 One of those free Advert Postcards, this one's for Santa Monica's Third Street Promenade.
I've done some guerrila appropriation and altered it to advertise my Broadcast Performances instead

I had my music packed up in a 5 gallon bucket with a lid which helped greatly to keep the ever-present playa dust at bay.
The radio station arrived over a couple of days and was up and running on Tuesday.
Essentially the station was set up inside a truck with a lift gate.
The back doors were open and a construction of plexi & plywood served to block off the opening and allow the DJ to look out onto the open space we designed into Gigsville village I can see my camp from the control board inside the truck.
Radio DJ shifts early in the week are 3 hours and due to greater demand later in the week, our shifts are 2 hours.

My friend Mutech, who rode up with me and is camped next door to me makes a request for TD. Mutech is also a TD fan, but not at my level; but saw TD perform live in '86.
He makes a request to play 'Kiew Mission' from _Exit_, not knowing that I've used this piece to start my broadcast the four years I've DJ'd at Black Rock City.
Since I have 3 hours to play with I break my show into two parts with its own theme.

Many thanks to listizen Sean Montgomery for the original posting to Tangerine Dream mailing list on 04/09/99
I had a little extra time to fill so these pieces went in:

Although my shift isn't until 10pm I'm a bit frazzled by the day's activities which is made a little tougher by the hot temps, low humidity, and the ever-present playa dust. I find out that in a little over a half an hour at 1pm that I was chosen to be a finalist at the 3rd annual Playa Iron Chef contest. I've got to get back to my camp 1/2 mile away, get my cooking utensils (including a propane burner), some foodstuffs & spices, AND find a Sous Chef! Although I didn't win, I was honoured to stand in the Playa Kitchen Stadium (actually the camp/offices of the Black Rock Gazette) I get invited to a dinner at Knife & Fork camp as thanks for choosing one of their camp mates to Sous for me. All in all, it was a good Burn and it's nice to be back home. But it's gonna take about a month to clean up and unpack/repack all my stuff. I've done Five journeys to Black Rock City and am calling it quits. I have no idea if and when DJ DreamHead will ever arise again to broadcast TD to the masses. Return To My )^( Main Page