If you've been elsewhere on my website, you probably have seen the picture above showing how I get into the Spirit of things for the Halloween Holiday
Unfortunately the picture above doesn't do complete justice to my creative efforts in creating one of the spookiest houses in my neighbourhood!

Skelemingos
A Macbre take on the tasteless,tacky classic Lawn Flamingo
I converted a birthday gift of an Amazon.com Gift Certificate from my kid Sister's familial clan into these little horrors..... Thankx Sis!!
If you're looking to get some for yourself, point your browser to:
http://www.amazon.com/Halloween-Skeleton-Yard-Flamingos-Decor/dp/B000WM8W6K/ref=sr_1_1?ie=UTF8&s=home-garden&qid=1286847442&sr=1-1
and get some for yourself!

Sometime during the night on 200810.19
Some Halloween Scrooges or Very Naughty Monsters (take your pick, depending on your temperment/attitude) decided that it would be a fun thing to STEAL Five of the THIRTEEN tombstones that I worked so hard to make
(Not Pictured: the one reading "All Your Base Are Belong To US")
I you happen to be one of these "people" ..... FOR SHAME!
It's not the monetary aspect of these tombstones (my materials cost was less than $25) but my time, energy, & creativity!

I do this because I *love* Halloween, and have ever since I was a little kid.
Of course as a tyke, it was dressing up and getting lots of candy.
Now, it's giving back to the kids of today as well as my own children.
For me that means setting up the decor, lights, & everything else
and handing out the treats, hoping that some good little monster who darkens my doorstep will someday be inspired to spook out their own house and spread the love and Spirit of this holiday. 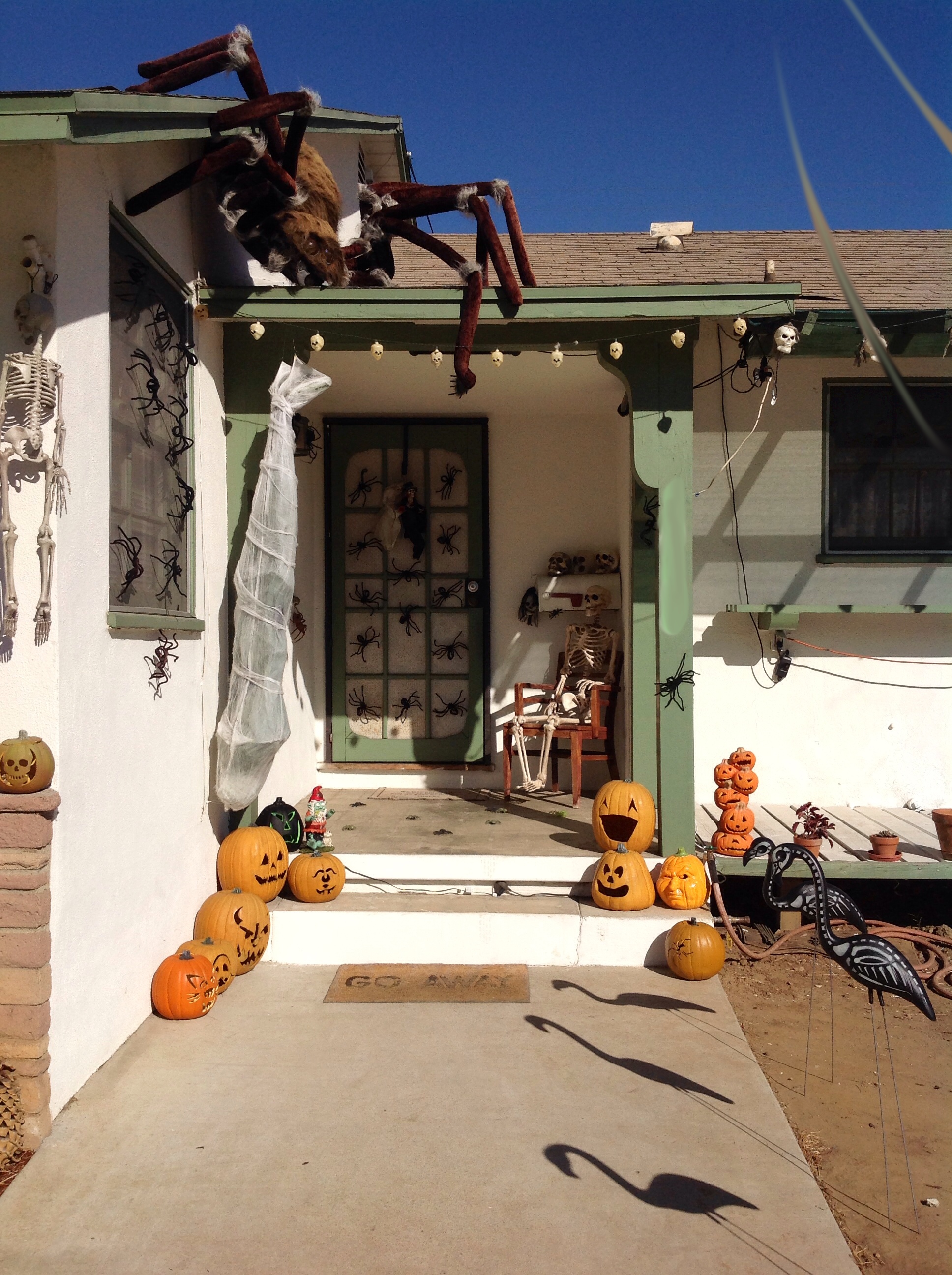 As you can guess, I have a certain affinity for Spiders as a decorative element
The Giant Hairy Spider is a 2008 addition.
The eyes light up with an eerie red glow! 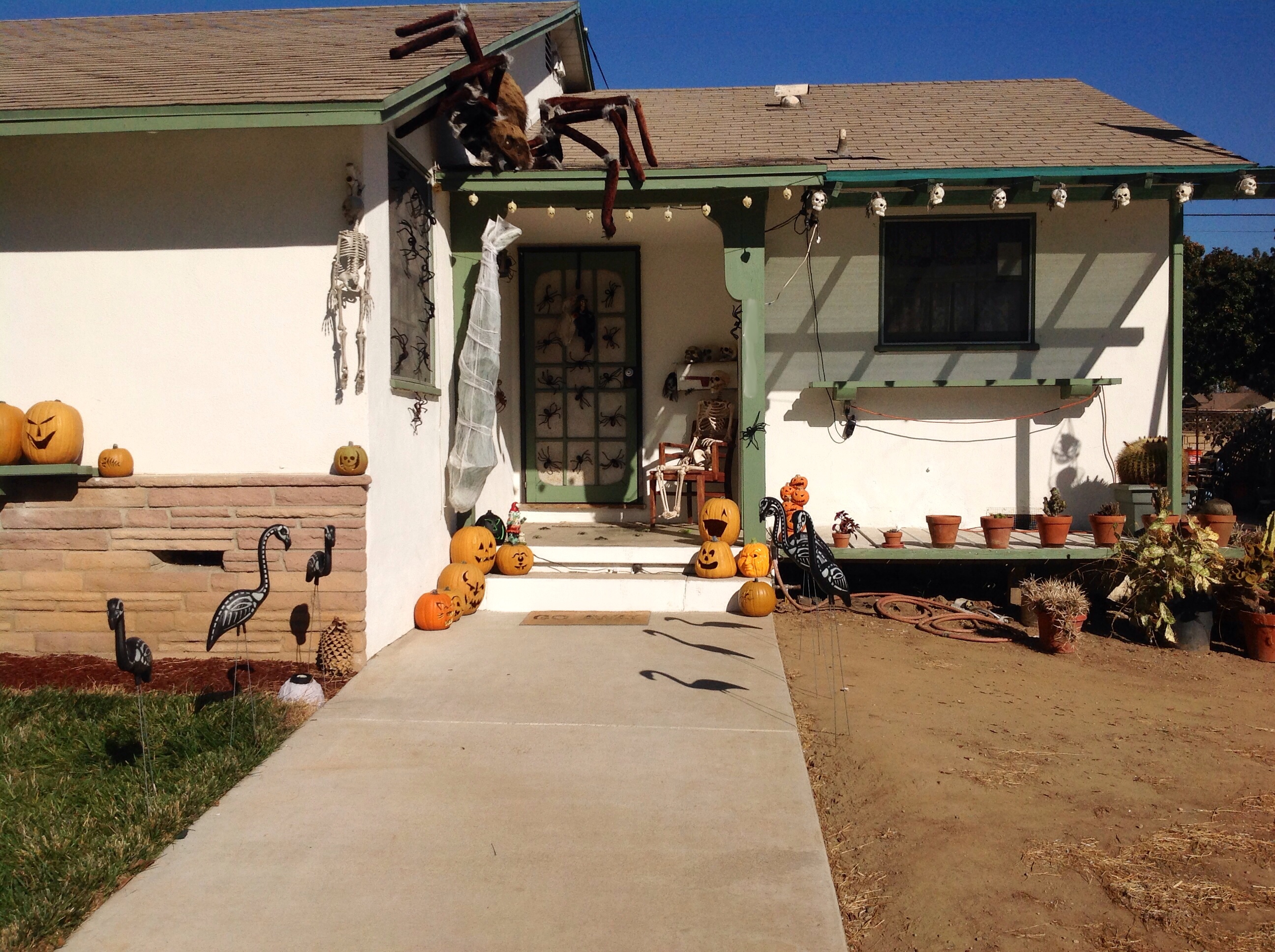 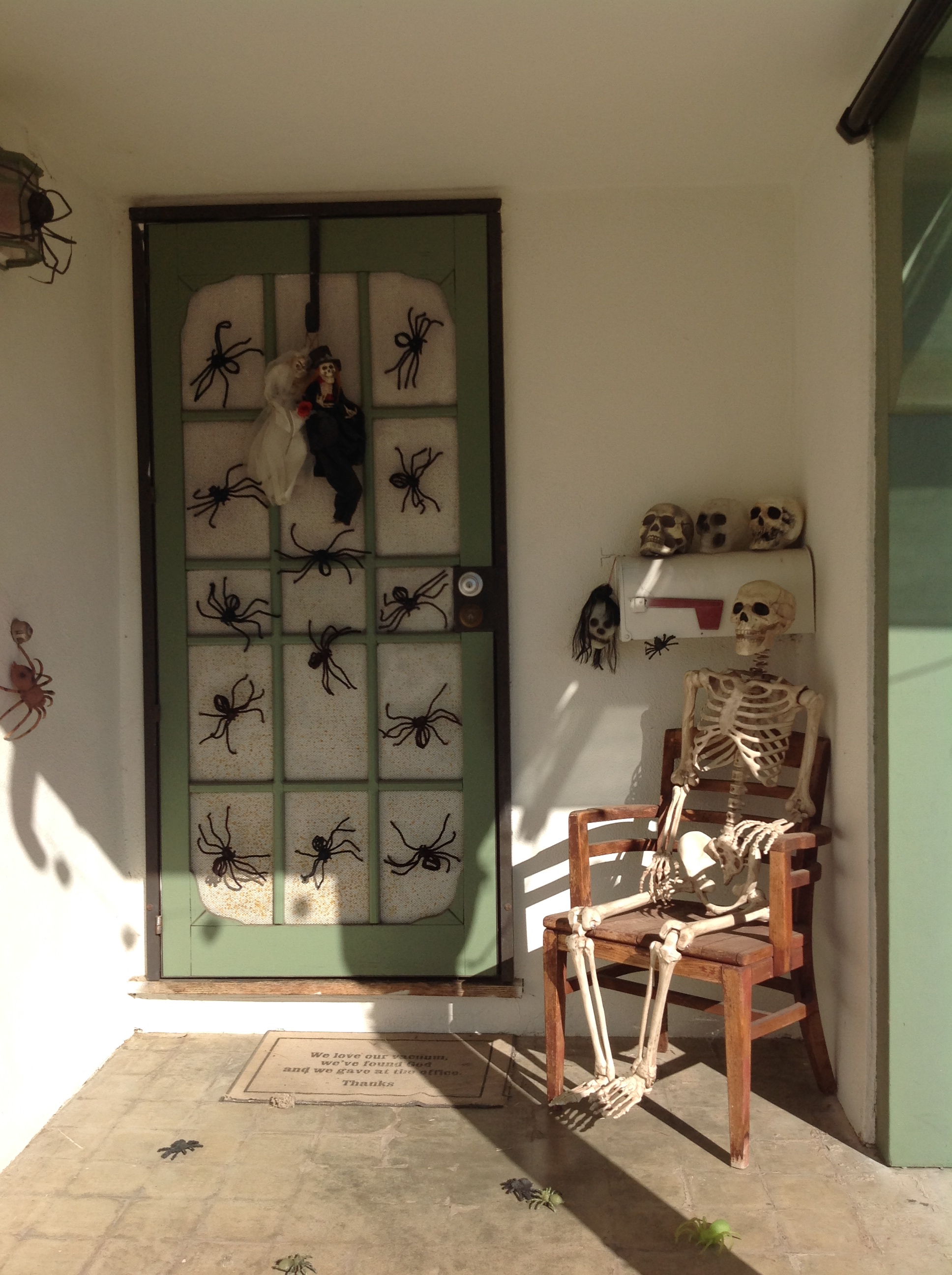 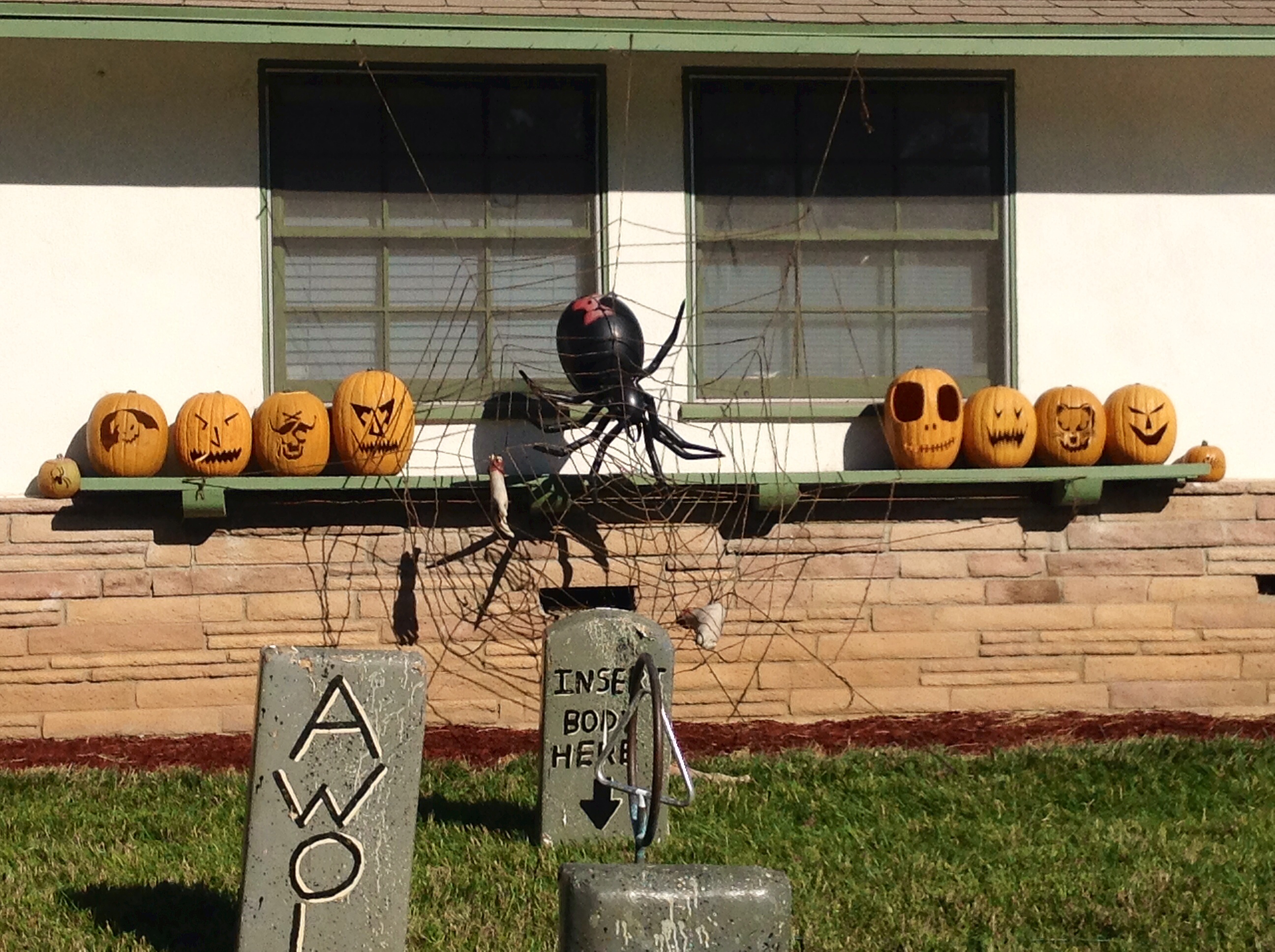 Ironically, this big inflatable Black Widow Spider was a Christmas gift from my Parental Units!
Mounted in a fake web made out of sissal rope, the fake severed limbs add an extra flair of macabre.
On Halloween Night, a strobe light illuminates this tableau 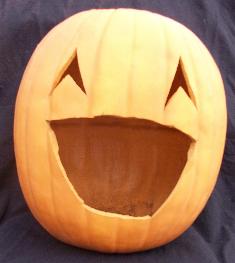 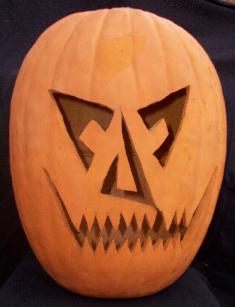 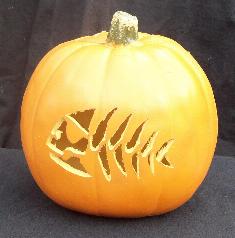 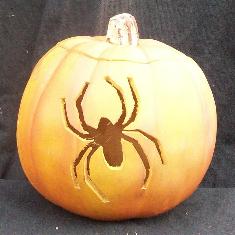 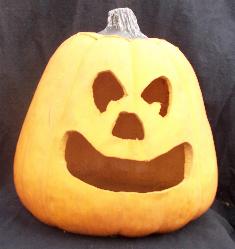 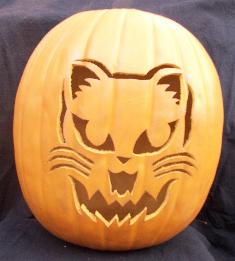 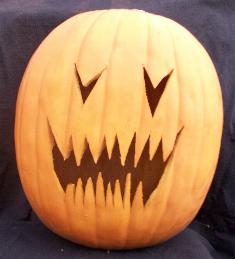 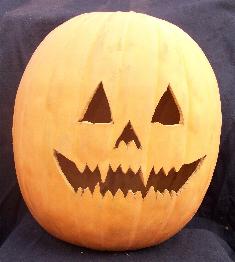 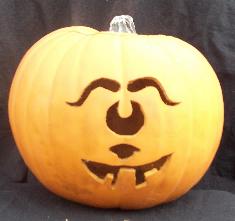 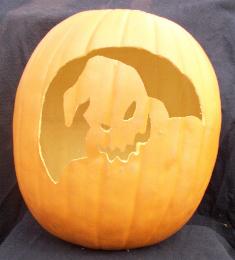 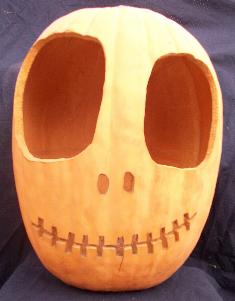 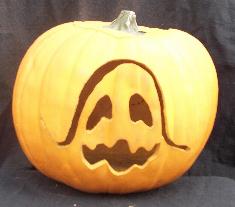 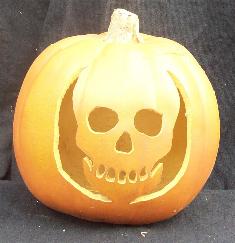 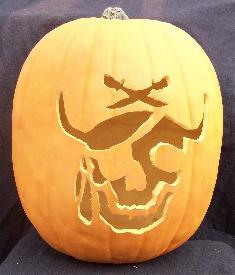 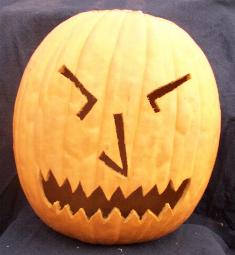 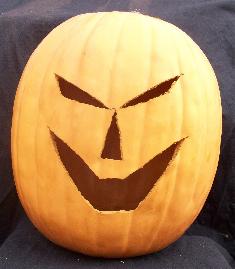 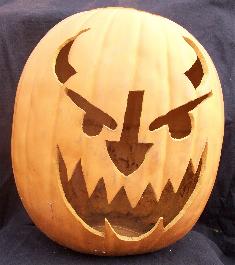 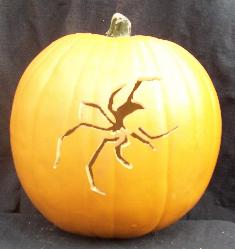 I love the craft pumpkins that I can buy at my local craft store.
Each year I add at least one more to my Halloween Tableau.
Beacuse they're fake I can re-use them year after year, after year.
To light them up, I've stocked up on these wonderful Pumpkin Strobes available at my local 99˘ Only store.
Powered by 2 'C' size batteries (also bought at the 99˘ for less than a buck a 2-pack) they safely illuminate my pumpkins for the Big Night 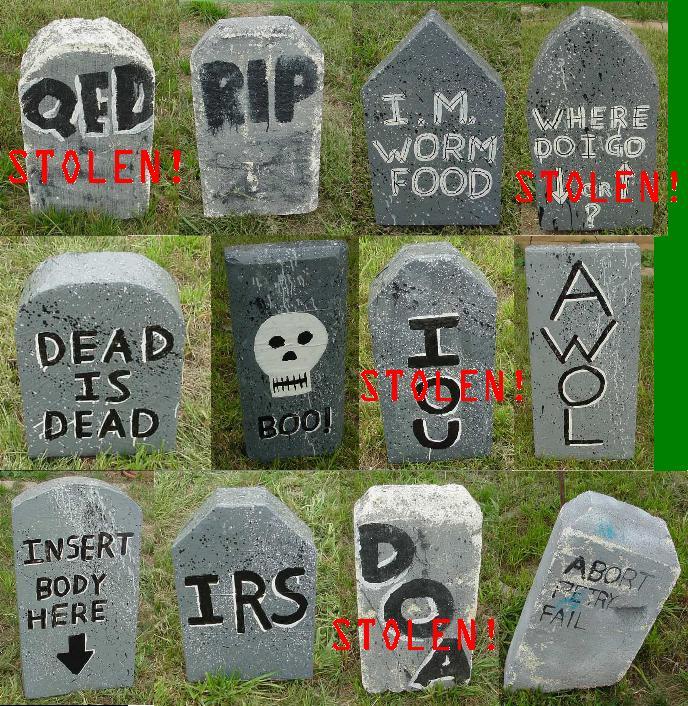 I admit the fake store-bought tombstones look cooler than the ones here.
But the store-bought ones are so cheesily skinny at only a couple of inches thick!
Less than an a half-hour at the table saw with a huge slab of Dumpster-Dived styrofoam yielded these masterpieces!
A little work with some grey, white & black paint.....
and I have my own clever epitaths. I know that the one emblazoned with Q.E.D. is a little esoteric.....
but the Abort, Retry, Fail is guaranteed to get a giggle from only the Right People (AKA, anyone familiar with computers dated before Windows 95?)
2006 yielded a bounty of dumpster-dived styrofoam!
A couple of layers of paiper-mache yielded a more durable and workable surface.
Grey, black and white paint and a final coating of some exterior grade polyurethane gave me 8 more markers to spook up the yard! 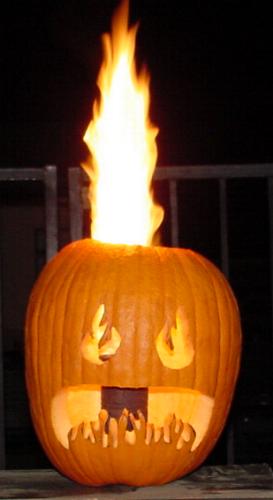 I do carve one REAL pumpkin each year, and that's because the fake ones would melt and burn
Inside is a $20 Roofer's Torch to provide the nice big flame.
The extreme heat of the flame pretty much cooks and chars up the pumpkin, which gives it's life gallantly in the pursuit of a damn good Halloween Tableau
at the end of the night, it gets sacrified to the Big Round File Cabinet

Find all the best haunted houses at hauntedhouseonline.com